The Crete campaign, code named ‘Operation Mercury’ or ‘Merkur’ by the Germans, was ferocious and lasted ten days, from 20th to 30th May 1941. Unlike the campaign on the Greek mainland, the Allies outnumbered the Germans on Crete, having deployed 31,200 troops to the island, in addition to the 25,000 soldiers sent by the Greeks and the original garrison of 5,300 troops stationed on the island, bringing the total to 61,800. The Germans however had only sent 23,000 troops, mainly paratroopers to Crete, having underestimated the strength of their opponents. They had also misread the response of the local people and were surprised by the fierce resistance of the Cretans, who used any means at their disposal to defend their island from the invaders.

The allies, under the command of New Zealand General Bernard Freyberg, had deployed their forces to prevent the three airfields on the island falling into enemy hands. The New Zealanders were to defend the airfield at Maleme - near Chania on the eastern side of the island, facing the Greek mainland. On the first day of the attack, German paratroopers proved to be easy targets with the allies having the upper hand. Due to a breakdown in communication however New Zealand Lieutenant-Colonel Leslie Andrews withdrew the 22nd New Zealand battalion on the evening of the first day, leaving the airfield unprotected. This opened the way for the Germans to land their aircrafts, bringing in reinforcements to support their airborne troops. By the 27 May the New Zealanders, including Maori battalion with remnants of the Australian 2/7th and 2/8th battalions, were fighting a rearguard action along the Chania to Tsikalarion road, near Suda Bay, nicknamed ‘42nd Street’ by the troops. Coming under heavy fire, with fierce shouts and ‘Maori War Cry’ Haka they engaged the Germans in a fierce bayonet charge inflicting heavy casualties.

At the same time, the Australian 2/1st and 2/11th battalions were sent to defend the airstrip at Rethymnon, situated half way between Maleme in the east and Heraklion to the west of the island. They were placed under the command of Lieutenant Ian Campbell - the C.O. of the 2/1st battalion. Campbell did a brilliant job of defending Rethymnon along with Major Ray Sandover whose 2/11th battalion fought a fierce final battle on 28 May at Perivolia. Campbell’s troops were forced to surrender. Having never received the order to retreat they found themselves encircled by the enemy. The 2/4th Australian battalion who had been deployed to Heraklion under the command of British Brigadier Chappell, ably defended the perimeter of the aerodrome along with 2/7th Australian Light Ack-Ack, Royal Marines and Engineers and the Black Watch.

German paratroops, part of the German airborne invasion of Crete, parachuting onto the village of Suda. Sunken British shipping can be seen in Suda Bay and a burning Junkers JU52 is flying across Suda Bay toward the Akrotiri Peninsula. (AWM P00433.009)

Following a hazardous journey through the White Mountain- south to Sfakia 10,000 allied soldiers were successfully evacuated by the Royal Navy from 29 May to 1 June. Six hundred Australian and four hundred New Zealander troops however remained trapped behind enemy lines, some for up to three years, surviving because of the bravery of Cretan people who fed and hid them at great personal risk to themselves. The Crete campaign resulted in the capture of 3,102 Australian troops, the deaths of more than 6,000 civilians and Allied casualties totalling 15,335. Both campaigns proved costly with 83% of the Australians taken prisoner by the Germans and Italians, coming from the Greek and Crete campaigns. Trough the horror of war the Australians and Greeks formed a closed bond of friendship that did not cease with the death of the veterans but continues to this day.

About 2,500 Greek Australians served in the Australian Defence Forces during World War Two, including 35 women who served in various roles at home and abroad. ey served in Greece/ Crete, Tobruk, El Alemein, Egypt, Palestine, New Guinea, Singapore, Thailand and other parts of the Asia Pacific region.

The Second Anzac Corps was formed out of the Australian and New Zealand units strung out across western Macedonia to resist the Nazi invasion. They fought courageously at Vevi, Florina, Tempe, Volos, Brallos Pass, Thermopylae, Megara and Corinth. Evacuated across the Aegean Sea to the island of Crete, they fought again in the Battle of Crete in May 1941. In the course of the world, over 17,000 Australian soldiers, airmen and sailors served, with 1,001 being wounded, 5,174 taken prisoners and 646 now resting in the Commonwealth War Graves at Phaleron (Athens), Rhodes and Suda Bay, Crete.

Anzac Captain Reginald Saunders, Australia’s highest decorated Aboriginal serviceman, was supported by the Tzangarakis family and evaded capture on Crete for almost one year until he finally escaped to Egypt. Captain Saunders later served Australia again in New Guinea and the Korean War. 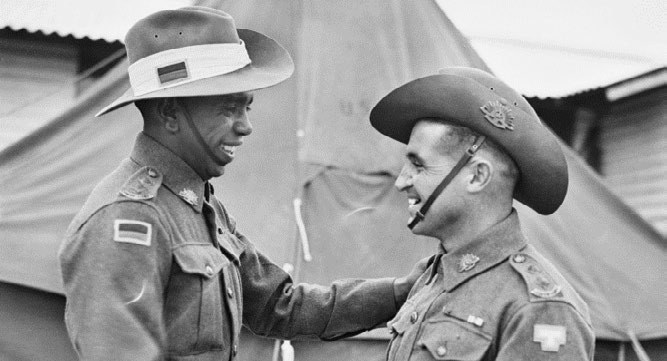