The Greek campaign, codenamed ‘Operation Marita’ by the Germans, commenced on 6 April 1941, when the Germans simultaneously attacked Greece through Bulgaria and Yugoslavia in a pincer movement designed to encircle the Greek troops fighting the Italians on the Albanian front, as a result of Italy’s declaration of war on Greece on 28 October 1940.

The allies sent a token force of British, Australian, New Zealand, Cypriot and Palestinian troops to aid Greece, in what is, often referred to as ‘The Second Gallipoli’. They began arriving in March 1941 under the code name - Lustre or ‘W’ Force, named after its Commander, British Major General Maitland Wilson. Of the 65,532 allied soldiers sent to Greece, the largest number of fighting troops came from Australia and New Zealand, the others were support troops, apart from one British Armoured Brigade. In this campaign, the allied forces were greatly outnumbered and outgunned by the Germans who had allocated ten divisions for the invasion of Greece and had over 1,000 planes at their disposal. What resulted was a fierce month long campaign where the allied troops fought valiantly but were underequipped and had to evacuate Greece.

On 10 April the Germans sent a XL Panzer Corps through Monastir Gap seizing the town of Florina. The first contact with the Germans occurred on 11-12 April when the SS Adolf Hitler unit and 9th Panzer division engaged the allies at Vevi, known as the ‘Battle of Vevi’ or the ‘Battle for Kleidi Pass’. Due to a confusing command structure, the 1 Rangers, part of the British Armoured Brigade, withdrew, leaving the 2/4th and 2/8th battalions exposed to heavy enemy fire. This resulted in the destruction of the 2/8th battalion as a fighting force for the rest of the Greek campaign.

To address this issue on 12 April General Blamey formed the second Anzac Corps which comprised of the 6th Australian Division and the 2nd New Zealand Division, under his command. Many troops were captured at Vevi, some escaped while others were buried in the very cold winter of 1941.

By 13 April the Greek forces in Epirus had begun to disintegrate. On the 14 April Katerini was captured by the Germans forcing Blamey to order the withdrawal of his forces on 15 April south to Thermopylae. The allies soon became engaged in a serious of rearguard actions aimed at delaying the German advance long enough to safely evacuate their troops out of Greece, sometimes described as a ‘fighting withdrawal’.

The 2/2nd battalion took part in first rearguard action at Pinios (Tempe) Gorge on 16 April where they had been sent to support the 2/1st New Zealand battalion, overwhelmed by the German forces. In the course of the battle, the 2/2nd battalion disintegrated with many soldiers trapped behind enemy lines, while others escaped with the help of the Greek people. At Lamia, Brigadier Stan Savige was tasked with keeping the main road out of Greece clear of returning Greek soldiers to facilitate the withdrawal of the allied troops. From the 19 April onwards the allied forces fought further delaying actions at Brallos and the Thermopylae Passes. On 21 April the 2/11th battalion held off the German 6th Mountain Division for three days at Brallos Pass to ensure the withdraw of the Allied troops, suffering the heaviest losses in killed and wounded of any Australian battalion in Greece.

It was a race against time as 800 German paratroopers landed on 26 April at Corinth Canal in an effort to cut off the evacuation of the allied forces from the beaches further south in the Peloponnese. The 17th Brigade sent a detachment to assist the 4th Hussars at the canal, enabling the 16th and 17th Australian Infantry Brigades to embark that evening from Kalamata. While the evacuation of Greece was a success, 10,000 soldiers were captured and a further 1,000 troops remained, trapped behind enemy lines assisted by the Greek people.

The allied troops who were evacuated from the Greek mainland found themselves fighting another campaign on the island of Crete. As early as November 1940 the British had established their main refuelling base in the Mediterranean on Crete. Long before the campaign on the Greek mainland, plans were in place for the defence of the island because of its strategic importance, with Churchill demanding Crete be turned into a ‘fortress’. 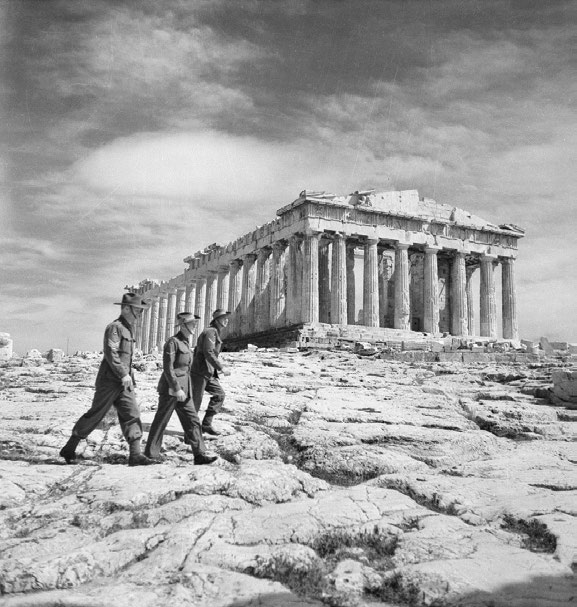 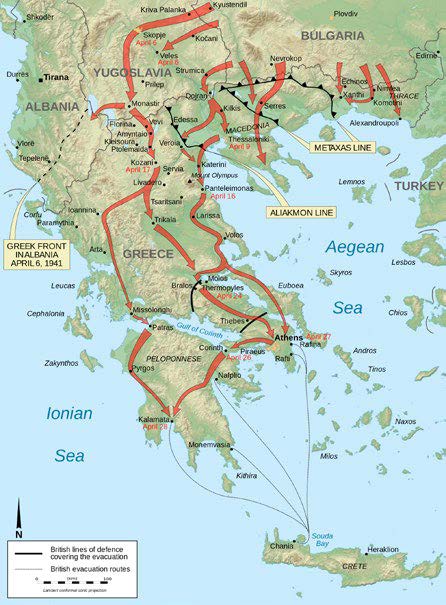