The Battle of Matapan took place o the Western coast of Crete on 29th March 1941 and involved the Australian ships HMAS Perth and HMAS Stuart .Under the command of Vice Admiral Pridham-Wippell, the cruisers HMAS Perth, HMS Orion, HMS Aajax, and HMS Gloucester, then patrolling in the Aegean Sea, was ordered to a point off Gavdos Island south of Crete to protect troop convoys bound for Greece, from attacks by the Italian Navy.

The Italian Fleet, comprising one battleship, eight cruisers, plus destroyers, was conducting sweeps west of Crete trying to find the convoys also off Gavdos. Unknowingly, the Allied ships were sailing into a potential disaster.

The battle ensign worn by Perth during the battle of Matapan (AWM REL29311).

Unfortunately, at 10.58am they ran into the new Italian battleship, Vittoria Veneto. They were now caught between the battleship and three Italian cruisers. Vittorio Veneto commenced very accurate fire, firing ninety four shells. However because the spread of shots was too wide, only slight damage was done to HMAS Perth and HMS Orion. Hopelessly outgunned, the Allied four cruisers set up a huge smokescreen and turned south at full speed to try to escape. They were now in a very dangerous position as the Italian battleship was driving them towards the Italian cruisers. At 11.27, just as disaster seemed about to strike, aircraft from HMS Formidable attacked Vittorio Veneto and she broke off the pursuit.

HMAS Perth and the others now turned to follow Vittorio Veneto and, until the close of the battle later that night, acted in a shadowing capacity for the main battle fleet. An attack by Formidable’s aircraft stopped the Italian cruiser Pola. The Italian admiral, not realizing the Allied Fleet was so close, ordered her sisters ships, Zara and Fiume to go to her assistance.

At 22.10 the radar on HMS Valiant detected the three cruisers at a range of only six miles. Illuminated by searchlights, the ships were pounded by 15” salvos from HMS Warspite and Valiant at point blank range. The Italians lost the three cruisers and the destroyers, Alfieri and Carducci plus 2400 men. HMAS Perth then returned to Piraeus and resumed patrols of the Aegean Sea.

The Battle of Matapan, was a resounding and essential Allied naval victory. Had the Italian cruisers managed to break into the sea routes between Egypt and Greece the result could have been disastrous for the Lustre Force convoys. Matapan was, in the words of Gavin Long, a ‘notable success’ and the Italian fleet, the only force in the Mediterranean capable of engaging the Royal Navy, did not again show itself during the ensuing months of the campaign in Greece and Crete thereby enabling the evacuation of tens of thousands of Allied troops in those future Battles. 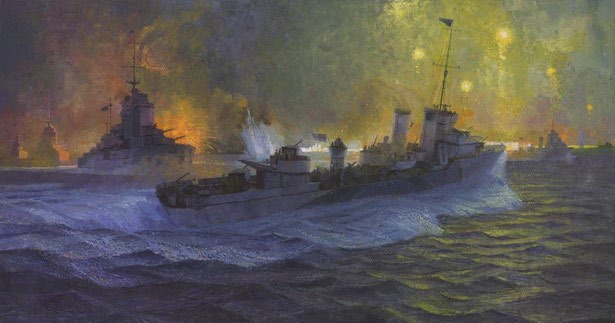 Battle of Matapan, Captain H.M.L Waller, in HMAS Stuart in the thick of the battle. By Frank Norton (AWM ART27623)