The Centenary of Anzac events were held in Greece and were the most extensive ever held. They included many events held on the Island of Lemnos - the forward base of the Gallipoli campaign in 1915, where Australia’s nurses served throughout the campaign and where 148 diggers remain buried - as well as on Anzac Day itself in Athens. The Melbourne-based Lemnos Gallipoli Commemorative Committee (LGCC), along with the NSW-based Lemnos 1915 group, assisted organizing and actively participated in many of these events. They collaborated with the Australian Embassy in Greece, the Embassy of Canada, the Royal Australian Navy and HMAS Success, Commonwealth War Graves Commissions, the Athens War Museum, Hellenic Navy and the Lemnos Friends of Anzac.

“Then and Now” image of Portianos Military Cemetery. Original photo by A.W. Savage | The firing after the Burial. Lemnos Island, c. 1915 | Courtesy of the State Library of NSW 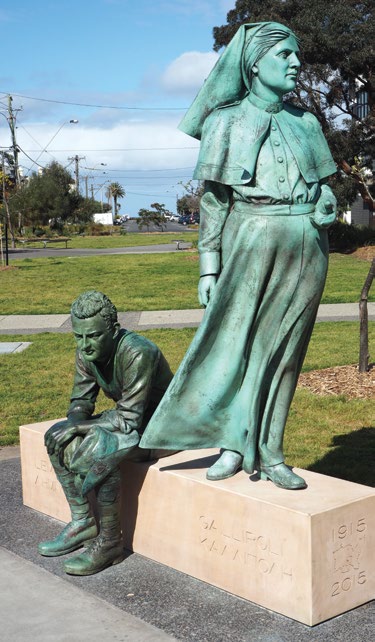 The Lemnos Gallipoli Memorial was unveiled in Melbourne’s Albert Park following over three years of fundraising and raising awareness by Melbourne’s Lemnos Gallipoli Commemorative Committee. The date was chosen because it was the centenary of the arrival of Australia’s nurses on Lemnos. The Memorial was designed and created by one of Australia’s best known commemorative sculptors, Peter Corlett, OAM. It features the figures of a nurse, standing protectively over a sick or wounded soldier. The statues stand and rest on the stone plinth, the colour of the stone of Lemnos’ ancient amphitheatre at Hepheastia, with the words Gallipoli and Lemnos as well as the names of many of the villages visited by the Anzacs in 1915. The Memorial is completed by an information board telling some of the storyof Lemnos’ link to Anzac. The Memorial is located near Port Melbourne’s famous piers from which Australia’s diggers and nurses departed during the First World War. It has been gifted to the City of Port Philip for their care and on-going maintenance. The Committee will continue to hold commemorative services at the Memorial in future years.

Australia’s most famous Indigenous officer, Captain Reg Saunders, was honoured at the Australian War Memorial with a new gallery bearing his name. Captain Saunders served in Greece, Crete, and New Guinea in WWII, before fighting in the Korean War. It was the first time a room at the War Memorial was named after a person. The ceremony was witnessed by his extended family and members of the Cretan and Greek communities.